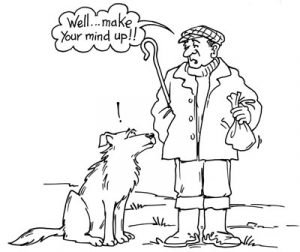 Most treatments for irritable bowel syndrome are designed to control either diarrhoea or constipation. People in the IBS-A group have the most variable symptoms. They don’t fit easily into treatment groups for research studies, so there is little research into the best way of alleviating their symptoms.

Does each subtype of irritable bowel syndrome denote a different disease?

Are people fixed into one type of irritable bowel syndrome?

The character of irritable bowel syndrome symptoms changes with time. Indeed, it is likely that most people will be found to be alternating between diarrhoea and constipation if they are studied for long enough. The IBS-A subgroup may actually be a transition group between IBS-D and IBS-C.

How frequently do people with IBS-A alternate between diarrhoea and constipation?

About a third of people alternate between hard, lumpy and looser, watery bowel motions within a 24-hour period. Another third alternate within a few days. Fewer than 10% alternate over a few weeks, but with the rest there is no pattern at all.

Which is worse for long-term health – constipation or diarrhoea? It is probably better to keep the bowel clear, but the detrimental effects of constipation have been greatly exaggerated in the past.

I have IBS-A. What treatment should I take?

If you have sustained periods of diarrhoea or constipation, you could use treatments appropriate to those subtypes, for example laxatives when you are constipated, and loperamide when you have diarrhoea.

My irritable bowel syndrome symptoms alter during the day. I might pass a hard stool in the morning, and then loose stools through the day. What should I do?

There are a number of alternatives that you should consider. It’s possible that the underlying problem is constipation. Your hard stool in the morning may be part of an incomplete evacuation, while the subsequent ‘diarrhoea’ is the bowel’s attempt to clear itself. Secreted water is bypassing hard stool. This is called overflow diarrhoea and is surprisingly common. The solution is to take stimulant laxatives such as senna or bisacodyl in large doses for a few days to really clear your bowel. You do this as a therapeutic experiment. If, with the laxatives, you pass a lot of stool and then feel better for a week or two, you have a strategy that you can use whenever necessary, while concentrating on avoiding constipation.

Alternatively, you may need to choose which symptoms are least and most disturbing to you. You may feel more comfortable with an empty bowel, and might feel you can put up with the diarrhoea. In that case take a laxative, or more fibre. Alternatively, if it’s the diarrhoea that it is most disturbing, take loperamide at low doses. With the loperamide, you may get very constipated and have to accept that every so often you will have to stop taking it for a few days and even take some laxatives to clear your bowel.

A further alternative for you is to use a glycerine or bisacodyl suppository in the morning to help with the hard stool and evacuate as much as possible. If you can get a clear rectum, you may have a great deal less trouble with urgent bowel motions during the rest of the day. It is also reasonable to clear your rectum with a suppository, and then once your bowels have opened well, to take loperamide so as to reduce bowel activity for the rest of the day.

The bottom line is that it is OK to experiment. Trial and error may be the only way to find out what suits you best.

I don’t think it’s possible to answer that – it is really a matter of experimenting until you find what’s best for you. More fibre may push you into diarrhoea-predominant irritable bowel syndrome, which may then be controllable with low doses of loperamide. Less fibre in your diet may resolve the diarrhoea component but push you towards constipation- predominant irritable bowel syndrome.

Could a food allergy or intolerance be causing my problems?

That’s possible, and you might like to keep a detailed food diary to see if there is any association between what you are eating and the state of your bowel.

Do the antispasmodic medications help in IBS-A?

Yes, these are definitely worth trying. The diarrhoea component may be a consequence of spasm or part of a prominent gastrocolic reflex. This is a normal reflex whereby when the stomach distends with food, the bowel becomes more active. It is often more active in people with irritable bowel syndrome, who might find themselves having to open their bowels whenever they begin to eat. Antispasmodic medication taken before the meal can help. In this context mebeverine (Colofac), and dicycloverine (dicyclomine, Merbentyl or Kolanticon gel) may be particularly helpful.

I do a lot of travelling. Could that be why my bowels are all over the place?

Travel is a common cause of a disturbed bowel habit. Many factors conspire to disturb your ‘norm’. Inevitably, there is less control over both the timing and the content of your diet while travelling. More caffeine and alcohol will increase bowel activity. Stress usually causes constipation but in some people will lead to diarrhoea. Circumstances may mean that you have to suppress your need to go to the toilet, increasing the tendency to constipation. Finally, exposure to viruses and bacteria that are new to you can cause travellers’ diarrhoea.

Constipation is the most common problem while travelling. If you are worried about taking laxatives, try suppositories. They usually work within half an hour.

If you are worried by diarrhoea during the journey, take loperamide. You can always take laxatives later. It’s more important to enjoy your trip.

Irritable bowel with an alternating pattern can be very difficult to treat, and you must be ready to experiment. You will probably have to choose which of your symptoms is most disturbing, accepting that treating the constipation may make the diarrhoea worse and vice versa. Obtaining a completely normal bowel habit may unfortunately be impossible, but there are many simple treatments to try that will give you some control over your bowel.

About a third of people with irritable bowel syndrome have both diarrhoea and constipation.

People’s main problem with irritable bowel syndrome can change over time from diarrhoea to constipation and vice versa. IBS-A may be a transition state between the two.

People with IBS-A should experiment with different treatments.

You may have to choose whether to treat for diarrhoea and live with constipation, or vice versa.